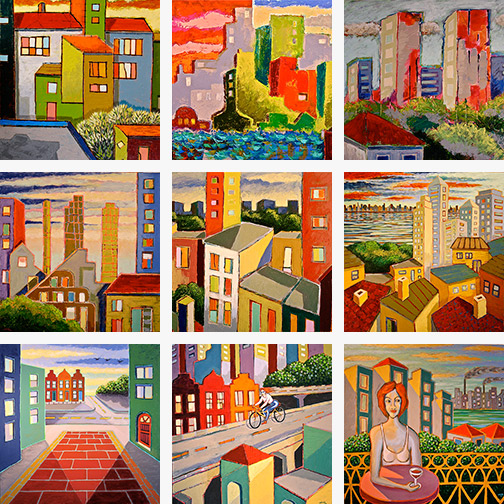 Since selling my business in 2014, I have found my artwork to be a great way to stay connected with the talented writers and artists who frequented my Hampden gallery. For each painting in this body of work, a different Maryland poet composed a sonnet. The writers are: Agnes Osinski, Edgar Gabriel Silex, Gina Caruso, Linda Joy Burke, Jennifer Keith, Amanda McCormick, Leslie Miller, Patricia VanAmburg, Ron Williams. 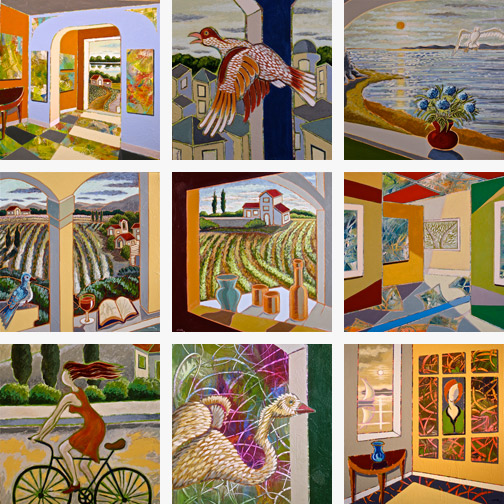 Getting lost in the conversation of color, light and shadow, I am testing my senses, leaving behind a visible trace.

Immersed in the mystery of all that exists. Unable to read the bird’s eyes, I wonder ‘til the brightness of the sun blinds me. As if light and darkness were not opposites, but they exist as one.

I am interested in the idea that we all see things differently because we filter things through our own frame of mind. Your opinion matters.

As an experiment, I asked six literary friends to write one sentence about each painting. The writers were:

The results added an intriguing layer of perspective and interaction. Will what they see change what you see? Einstein said, “Logic takes you from Point A to Point B. Imagination takes you everywhere.” 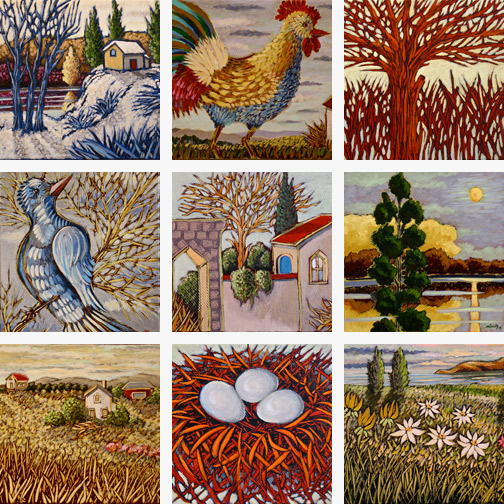 The private moment one has with nature leaves you with an impression that you carry in your mind. I try to express that on my canvases. These works have an imaginary quality to them. They resemble my emotions and memories. These paintings are glimpses of what moved me. When people tell me they get a familiar, nostalgic feeling from one of my paintings, it makes me happy. Even though the viewer and I have different experiences, we connect because we have similar emotions and memories.

Cara Ober said, "These paintings function as a vehicle for memory and metaphor, rather than depicting a specific place and time."
(Style Magazine, Natural Instincts, February 2015) 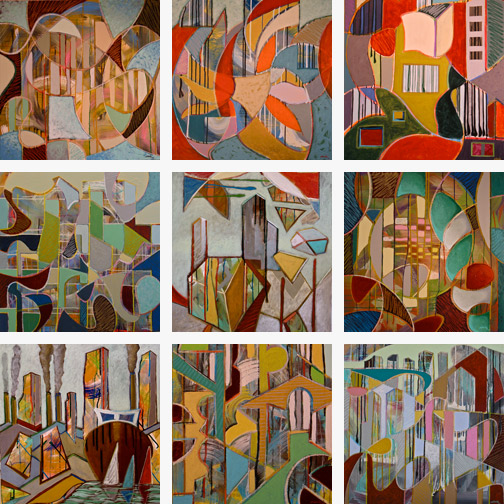 For the past few years, I have been experimenting with the ideas of cubism, architecture, chaos and order. This comes through in my Unreal Abstracts.

I am interested in the relationship between the painting and the viewer. The painting doesn't exist without you, the viewer. Your opinion matters. Because it's not about what I painted, it's about what you see.

Einstein said, "Logic takes you from Point A to Point B. Imagination takes you everywhere." 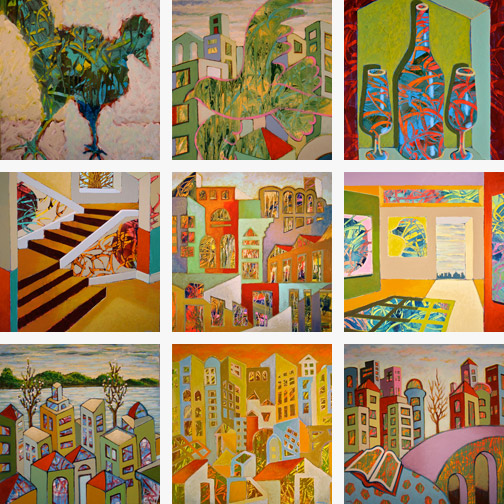 Due to connectivity and the loss of privacy in the electronic age, the city setting no longer offers anonymity.

The mountain village comes full circle in my paintings, where each one of them becomes a unique entity of intimacy and community. The Dream City Village, if you will.

Meditations on Dream City: Minas speaks of being influenced by painters Picasso, Braque, Cezanne, and Derain. When I view his work, I am reminded of the Romantic poets Keats, Whitman, Wordsworth, and Shelley, who I have referenced liberally. We are interconnected and trapped by ourselves, closer than ever and simultaneously farther apart. Nature seeps into Minas' work like an insanity, breaking through cracks and weaving through windows, breaking down all that we have built, like it always does, beckoning us back to its paradise of the mind and soul.(Jen Michalski)

I am very lucky to live in Charles Village, surrounded by beautiful architecture. But instead of painting one more pretty picture of our front porch, I decided to use the inspiring moments and my love for architecture to make a statement about the current state of division that keeps our ideas and actions stagnated on the drawing table. These paintings are inspired by architectural drawings of structures that have never been built or restored. 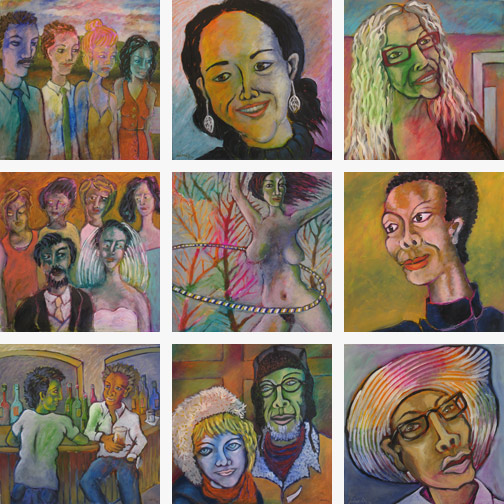 Minás Konsolas' new portraits mix a variety of materials on the canvas – in particular, the vibrant inks with the acrylic paints and oil pastel sticks. The infusion of bright colors into his formerly subdued palette of earth tones draws us into each of these portraits. The translucent inks are little bits of personality peeking out under a pattern of textured, gestural brushstrokes (which, by the way, mimic the corrugated ribs of his cardboard portraits from two years ago).

Many of the portraits are known personalities among Baltimore's artists and the faces seem to socialize with each other, forming a kind of community. There is a transfer of energy between the subject and the artist and the viewer. The triangulation shows us that these paintings are portraits of the artist and the gallery-goer as well. They are not literal, but they are a kind of likeness – personality portraits that are at once representational and enthusiastic.
- Michael Kimball 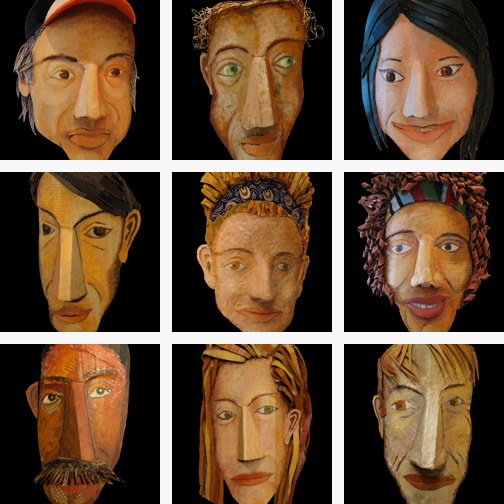 In the theatre world, the actor/character separation is always a dilemma. In the Ancient world, the mask was the solution.

I needed a change after painting on canvas for the last four years. In my case, the mask is my tool for impersonating a sculptor and re-working all the cardboard boxes that come through my store. 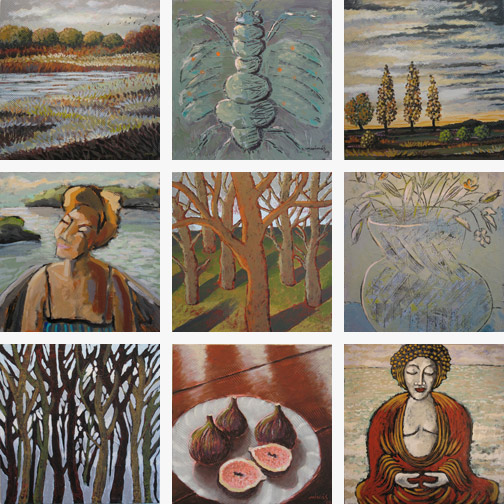 Minás Konsolas develops his canvases by adding and eliminating multiple layers of paint. He creates his images by scraping and smearing. This process allows him to paint and draw at the same time.